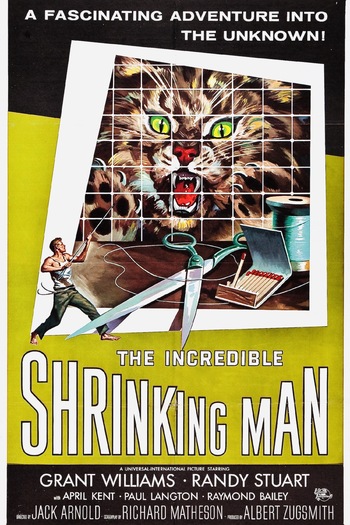 "Easy enough to talk of soul and spirit and existential worth, but not when you're three feet tall."
Advertisement:

The Incredible Shrinking Man is a 1957 Sci-Fi Horror film directed by Jack Arnold, based on the novel The Shrinking Man by Richard Matheson (who also co-wrote the screenplay adaptation).

Grant Williams stars as Scott Carey, an ordinary man who is exposed to some type of dust cloud (generally assumed to be radioactive) and subsequently begins to slowly but inexorably shrink, eventually growing so miniscule that his wife Louise (Randy Stuart) is unable to see or hear him. Scott soon finds himself battling for his life against his pet cat and a spider, and confronts the possibility of eventually shrinking away to nothing.

This is considered to be one of the better sci-fi movies of The '50s, thanks to an intelligent script and above-average special effects which lift it above the standard B-Movie fare of the era.

The 1981 comedy film The Incredible Shrinking Woman, directed by Joel Schumacher and starring Lily Tomlin in the title role, is both a remake and spoof of the original story. In 2015, there was a comic book adaptation from IDW Publishing, which was distributed in a four-issue miniseries from July to October. It shares the novel's title (though the variant cover to Issue 3 uses the movie title) and is closer to it in terms of story detail.