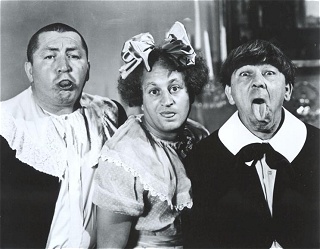 Totally not The Three Stooges in disguise.

Fictional grownups have been known to disguise themselves as some pretty silly things. Bushes and trees, two-person horses that don't look anything remotely like horses, oh—and did we mention children? That's right. From time to time, TV adults like to try and fool everyone by masquerading as gigantic children. Oh, and occasionally teenagers as well.

In an attempt to blend in with their supposed age group, Totally Radical speech patterns will nearly always be employed and the character will always end up looking like an idiot. At least to us, the viewers, that is. The other characters might not see through this odd-looking, strangely out-of-date-sounding kid's "clever" disguise. However, they usually do.

Depending on the realism of the show, the adult (or even teen) in question will either:

A Sub-Trope of Age-Inappropriate Dress (just a deliberate form).

Compare Goo Goo Getup, when a character disguises itself as a baby.

Not to be confused with Dawson Casting (adult actors portraying teenagers, typically with some level of Suspension of Disbelief on the part of the audience).

Type A With Children Examples:

Type B With Children Examples:

Type A With Teenagers Examples: