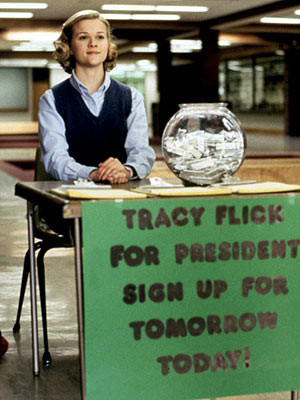 Election is a 1999 satirical teen dramedy based on the 1998 novel of the same name by Tom Perrotta, starring Matthew Broderick, Reese Witherspoon and Chris Klein and directed by Alexander Payne.

Overachieving high school student Tracy Flick is running unopposed for Student Council President. This draws the ire of history and civics teacher Jim McAllister, who hates Tracy's attitude and feels that the students should have a choice — any choice — in the election. There's also the fact that McAllister is holding a massive grudge against Tracy for engaging in a sexual relationship with his best friend/fellow teacher Dave Novotny, which wound up getting him fired and destroying his marriage — while Tracy (thanks to her mother) got the school to cover up the entire thing in order to protect her reputation.

To foil her dreams of using the election as a springboard for her future, McAllister recruits injured star football player Paul Metzler to run against Tracy. This inspires Paul's lesbian sister Tammy to run as well, in order to get revenge upon Paul for dating Tammy's ex-girlfriend (who dumped Tammy after deciding that she wasn't a lesbian after all). Meanwhile, McAllister, feeling a lack of passion in his love life (and fearing his own sexual interest in Tracy), starts dating the aforementioned friend's ex-wife. All of this culminates into the mother of all bad days as all of these trains crash into each other.

The film had a mediocre take at the box office, due to the studio screwing up its marketing and portraying it as a straight-up teen comedy as opposed to a drama with Black Comedy overtones — presumably an effort to cash in on the success of American Pie (the fact that Chris Klein is in both films adds a bit of credence to that theory), which came out earlier that year.

In 2022, Perotta wrote a sequel, Tracy Flick Can't Win, which finds the title character as a assistant principal in a New Jersey high school...and not at all happy about where life has taken her.

Not to be confused with the 2005 film Election.