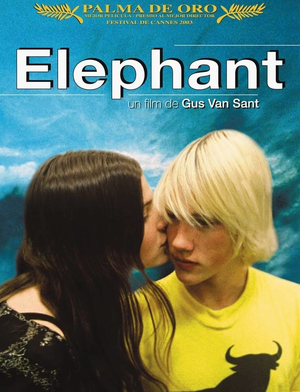 Elephant is a 2003 drama film written and directed by Gus Van Sant film that tells the story of a high school shooting similar to the Columbine massacre.

Van Sant based the movie on a 1989 BBC short film of the same name made by Alan Clarke. Clarke's film dealt with The Troubles in Northern Ireland and was largely composed of cold, observational tracking shots following gunmen as they assassinate targets.

The title refers both to how Van Sant interpreted the short's name (the old Jain parable of a group of several blind men trying to describe an elephant and drawing different conclusions based on which body part each touched) and what Clarke originally intended (the idea of the Elephant in the Living Room, in this case being Columbine).

The structure of the film more closely resembles Van Sant's vision, as the story of a single day is shown from the viewpoint of different high school students (read: blind men), including the two shooters themselves. While many possible explanations are offered for the actions of the shooters (violent video games, neo-Nazism, bullying, etc), the film deliberately does not make their motives clear.

Influenced by the minimalist realism of Clarke's short, the film is noted for its use of long tracking shots, extended sequences with little or no dialogue and a cast comprising mostly of non-actors, giving it a disconnected and ethereal quality.

The film competed in the 2003 Cannes Film Festival and won both the Best Director award for Van Sant and the Palme d'Or.

This is the second film in Van Sant's Death Trilogy, following Gerry and preceding Last Days.