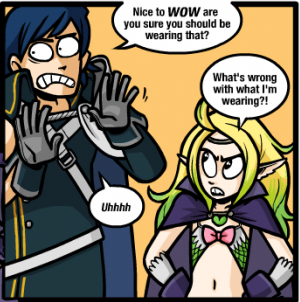 What's wrong is that being Really 700 Years Old, but dressing like you're a twenty-something,

only works if Immortality Begins at Twenty.
"She manages to dress like a grandmother and a toddler at the same time."
— Kurt Hummel (on the fashions of Rachel Berry), Glee
Advertisement:

Basically a character dressing in a manner that just doesn't fit the cultural norm for the character's age. It could be in clothing, hairstyle, makeup, or something else.

The reasons can vary, although dressing up or costumes wouldn't count for this. This is more a character either not realizing how they look dressed like that, or maybe even trying to pretend they are a different age (either as a disguise, or as a denial about one's age).

A Super-Trope to Adults Dressed as Children.

Compare Mistaken Age, Improbable Age, Dawson Casting and Age-Inappropriate Art. See also No Dress Code, I Was Quite a Fashion Victim. A common cause for a Parental Fashion Veto.