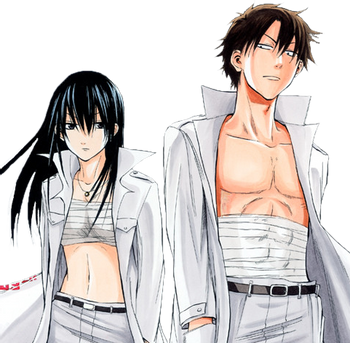 Badass outfit at lowest cost, for her and for him.
A sarashi is a long strip of cloth, usually thick cotton or bandages, wrapped tightly around the midriff up to the chest. Historically worn under kimono both by samurai (to resist injury) and by women (to present a slim figure), its association with warriors has made it a near-universal symbol of toughness in Japan.
Advertisement:

Though common in anime — Japanese Delinquents (particularly in classic, older series) will often be seen wearing one under their coat or unbuttoned shirt as a visible cue as to their general level of badassery — this is also a general Japanese cultural trope, often found in Real Life and applicable to women as well as to men.

For female characters, however, a sarashi can be worn as a tube top, in which the bandages are worn wrapped around only their chest, while their midriff is left bare; a sarashi may also serve as an accessory to a potentially boring outfit, as an aid in crossdressing, or simply as a way to prevent Gainaxing. In these cases the wrapping is pushed up a few inches to cover and flatten the chest (usually), and the irony inherent in using such a traditional symbol of masculinity to accentuate or disguise femininity may be deliberately invoked.

Of course, if it's a female samurai,note "Onna bugeisha" which extends to all female warriors, is the proper term because "samurai" should only be used for men, as it was in the Sengoku Period. a sarashi is pretty much a given.