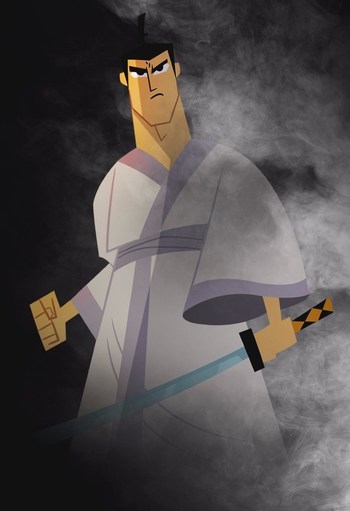 "They call me... Jack."
Click here to see Jack in the first half of Season 5. 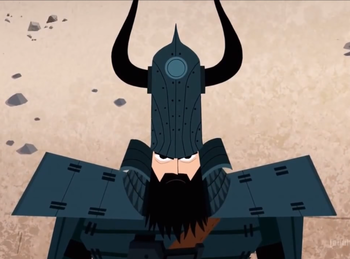 Our hero, an unnamed samurai prince, and the son of the Japanese emperor who initially released (and then defeated) the demon Aku. But when Aku later returned for revenge and ravaged Japan, the prince escaped and spent his youth training in every country in the known world, in preparation for the final battle... but before the final blow was struck, Aku flung him far into the future. Taking the alias of "Jack" from some jive-talking locals, he must now Walk the Earth, seeking a way back to the past to finish that battle... not that this will stop him from setting things right in the future as well. 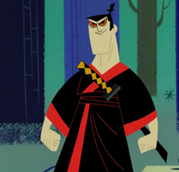 "I am the son of Aku's magic. He has looked deep within you and has spawned me from your own burning hatred! I am your dark side, and I possess all the powers that you wield. And I have only one purpose in my existence: to DESTROY you!"

Weary of those worthless bounty hunters, Aku created a dark version of the samurai in an attempt to finish Jack. Mad Jack is defeated when Jack meditates to seal him off, since he existed only as a manifestation of Jack's negative emotions. 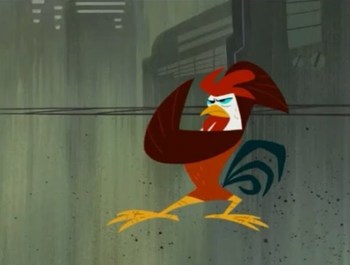 During the episode of the same name, a jerkass wizard transforms Samurai Jack into a chicken. Chicken Jack soon gets abducted by a greedy and amoral man named Cacciatore, who forces him to participate in an animal fighting arena.

A hideous hybrid that was born when Samurai Jack was corrupted by the essence of Aku. See Aku - Other Forms for more information.

"Uh, like, you must be confused. My name's Brent Worthington."

The result of Jack's initial run in with some sirens; Brent is a dumb surfer dude who works as a waiter on a ship servicing a variety of travelers, one of which (fortunately) turned out to be the Scotsman. He has no memory of the incident that led him to being a waiter, so the Scotsman has to drag him across the ocean to put his memory back together. 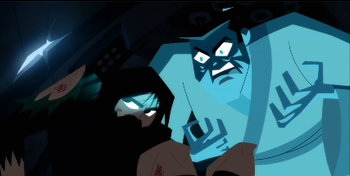 Click here to see the primal form of Inner Jack. 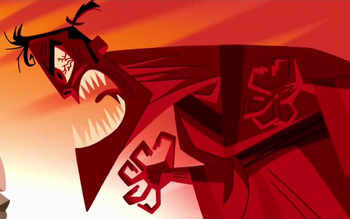 Click here to see the balanced form of Inner Jack. 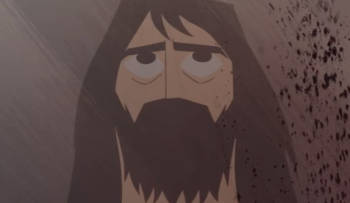 An embodiment of Jack's despair and guilt over his failure to stop Aku. He shows up from time-to-time to convince Jack to end his quest or make him feel guilty about his actions. Depending on Jack's mental state, this fractured version of him might show himself. He can appear as the spitting image of Jack that doles out annoyance and biting sarcasm in one of his tamer moments, to a psychotically warped version of him that is anything but approachable and looks about ready to rip everything apart when he doesn't get his way. After Jack gains a sense of balance over his emotions, Inner Jack mellows into a reflection of Jack's former, weary self.