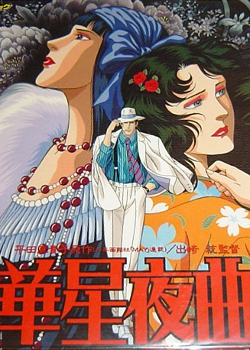 Tokyo, 1923. The Roaring '20s are at their peak, and specially in the twelfth year of the Taisho Era. At this moment in time, the city is a mixture of extremes: past and present, rich and poor, good and bad. This is a city where we see both horsecarts and motorcars, swords and pistols, lords and businessmen...

Two of the persons involved in this Crapsaccharine World are Akiko Hashou, a young and beautiful noblewoman, and her equally pretty maidservant Sara Uchida. The girls's lives seem to be going on relatively smoothly until both Akiko and Sara meet Takao Itou alias Taka, a handsome man from a low-class setting, who also has ties to the Yakuza; this sets off a turbulent Love Triangle that totally changes the three's lives. For worse, a fateful date

Kasei Yakyoku is a josei manga written by Makiko Hirata, which was serialized from 1984 to 1988. In 1989, director Osamu Dezaki would release it as a 4-episode OAV series, which now is almost impossible to find.

Kasei Yakyoku has examples of. . .