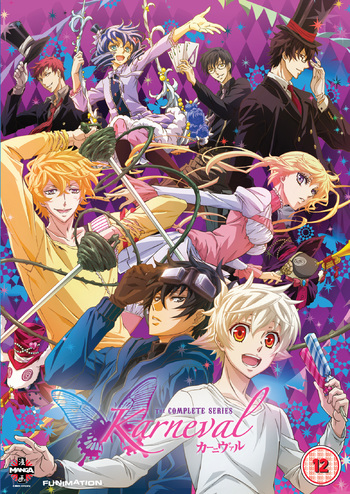 "I only ever have three choices: enemy, nobody, or prey."
Advertisement:

A fifteen-year-old boy named Gareki, who gets by on stealing from rich people's mansions, one day comes across a strange young lad named Nai. Nai had been searching for somebody important to him with only an abandoned, blood-covered bracelet as a clue, but wound up being captured by a cruel, abnormal woman because of his otherworldly naivety.

The two are set-up within her mansion wherein Nai is held captive and where the rest of Gareki's crew is slaughtered, and soon become wanted criminals sought out by military security operatives. Just as Nai and Gareki find themselves in a desperate predicament, they encounter none other than the Second Ship of the nation's most powerful defense organization, Circus, with its deceptive captain Hirato, its fighters, the cheerful Yogi and dedicated Tsukumo, and its odd black mechanical sheep.

As they learn more of Nai's past and its relation to Kafuka, a dark and hidden organization involved in illegal genetic research that vehemently opposes the government, the two continue to meet allies, friends and enemies alike through Circus, and eventually become wrapped up in the defense organization's mysterious affairs.

A fantasy manga series by Mikanagi Touya, which originally started serialization in the manga magazine Monthly Comic Zero Sum and was published by Ichijinsha in early 2008. There are currently 10 volumes out, with several drama CDs released in Japan. An anime adaptation by Manglobe started airing on April 4th, 2013.