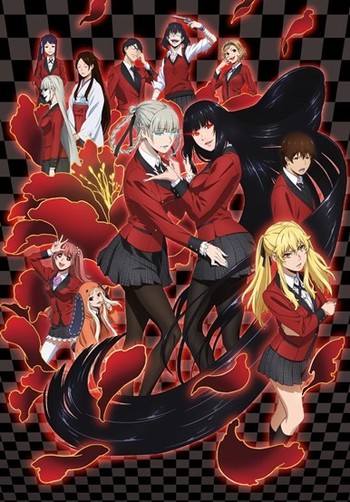 "Shall we gamble?"Note Foreground: Yumeko Jabami (right) and Kirari Momobami (left) / Lower right: Ryota Suzui (above) and Mary Saotome (below) / Lower left: Yumemi Yumemite (above) and Runa Yomozuki (below) / Top, left to right: Sayaka Igarashi, Ririka Momobami, Yuriko Nishinotouin, Kaede Manyuda, Midari Ikishima and Itsuki Sumeragi
"In a capitalist society, money is naturally life. No sane person would entrust their life to luck. And yet, many people go to casinos, because they derive pleasure from this insanity! In other words... gambling is more fun the crazier it gets!"
— Yumeko Jabami
Advertisement:

Kakegurui (賭ケグルイ, "The Compulsive Gambler") is an ongoing 2014 manga series written by Homura Kawamoto and illustrated by Tooru Naomura (who also wrote and illustrated Shitsurakuen), published by Square Enix under its Gangan Joker imprint.

Hyakkaou Private Academy is a prestigious school for the children of the richest of the rich, where the main curriculum is the art of reading others and taking advantage of chaotic situations: in other words, the art of gambling. Within this world, a sadistic regime of Social Darwinism sees students betting huge amounts of money, or even their bodies, for a chance to rise up the social hierarchy where the top rule like tyrants and the bottom students become slaves to their debt.

Into this cutthroat school steps Yumeko Jabami, a New Transfer Student whose innocent facade hides a psychotic addiction to gambling and high-stakes situations. With a keen intellect able to pierce through the elaborate cheating methods used by the most powerful students to rig games in their favour, Yumeko threatens to destroy the twisted hierarchy of the school simply for the thrill of it.

Has an anime adaptation written by Yasuko Kobayashi and produced by MAPPA for the summer 2017 block. The series was picked up by Netflix for western distribution, releasing it worldwide on February 1, 2018. A second season aired in the winter 2019 block. Spin Offs include

Madness is the essence of troping: