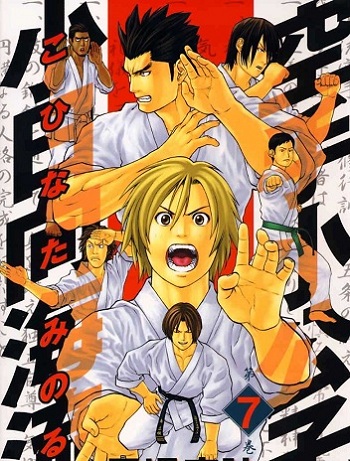 Karate Shoukoushi Kohinata Minoru ("Young Karate Prince Kohinata Minoru") is a seinen sports manga written and illustrated by Yasushi Baba. The manga ran in Weekly Young Magazine from 2000 to 2012, ending at 500 chapters that were compiled into 50 volumes.

It tells the story of Kohinata Minoru, a freshman at Reinan University, a school renowned for its numerous and formidable sports teams, who is the official Persona Non Grata of the gymnastics club. Holding him responsible for their lost spot in the latest competition selection, his seniors have kicked him out of the club, and continue to bully him over his friendship with Misaki Nana, the club belle.

Enter Mutou Ryuuji, a karate club member who happens upon the latest altercation and beats up not only the offending club members, but Minoru as well for failing to stand up for Nana and himself. Having lost his spot in the gymnastics club, Minoru accedes to Mutou’s demands, and the club captain Minami Hiroki’s more gracious requests, and joins the school’s Second Karate Club, a small club practicing the brutal full contact style of Kaburagi Ryu. With his gymnastic abilities, Minoru discovers not only talent, but a growing passion for karate. And It’s a good thing too, since he has to take on not only the club’s grueling training, but also its numerous feuds and rivalries, in his journey to work his way to the top of the sport.

A sequel manga called Karate Shoukoushi Monogatari ran in the same magazine from 2012 to 2014.