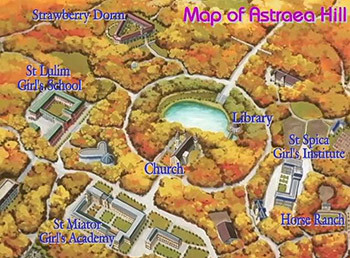 Ah, finally! A high school that includes equestrianism in the curriculum.
Advertisement:

A school (usually a Boarding School or, at the very least, a very fancy private day school) typically housing students of high school age (but sometimes younger) but of a size and structure resembling a college/university. Although a story may only follow a few characters, backgrounds and wide angle shots clearly show that the student body is quite large. In anime and manga, this often goes hand in hand with being a One-Gender School.

May or may not be an Academy of Adventure of some sort. May be an Elevator School, needing the size to handle the increased student count from hosting more than one level of education.

Not necessarily related to the many University High Schools