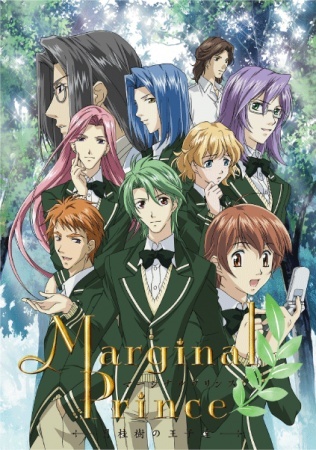 A small island in the Pacific Ocean is home to a boarding school for high-class boys. The 16-year-old Yuuta gets the chance to study among the rich and famous of the world, and via his cell phone's video function, he is able to communicate with his older sister back in Japan on a daily basis, same as his friends he makes at the school. While Yuuta is trying to adapt to the new school and make friends, and his sister gets in contact with the other boys via phone more and more, something bad is going on behind the scenes...

Marginal Prince is based on a Japanese cell phone game for the NTT DoCoMo network, which was created mainly for girls and women. The game's goal is to have one of the boys fall in love with the player (although 'neutral' endings are possible as well) in a classic Dating Sim style, flavoured with speech recognition software. As the result of a finished scenario, a character will sing one song, of which most are also incorporated in the anime, and for which the series of 13 episodes might be most famous (possibly also thanks to the mostly well-known cast). A manga, drama CD and novel were released as well.