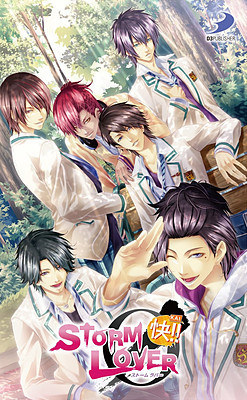 Our protagonist Igarashi Yuna (called Ito Yuna in the fan translation due to space issues) is a student in her second year of high school who has just moved to a new city and transferred to the prestigious St. Louis high school. There she'll get acquitanced with a vivid cast of Bishōnen suitors: the mysterious and awkward Mio, the harsh but kind-hearted Kyosuke, the flirtatious wannabe rock star Soya, the lazy Takumi, the energetic and slightly mischievous Rikka, the wealthy student council president Yuto and her homeroom teacher Tsukasa. From now on, she'll have to handle her studies, friendships and newfound romances.

An Otome Game developed by D3 Publisher for the PlayStation Portable in 2010, it sets apart from similar raising sim games by giving the player the opportunity to start dating a boy since early into the game, breaking up with him, cheating and being cheated on... instead of the usual fare of pursuing a boy and obtaining his confession as ending.

The game obtained a fandisc subtitled Natsu Koi!!, expanding the Beach Episode part of the central game, a sequel titled Storm Lover 2nd!! set in the same school but with a different set of characters, and an Updated Rerelease subtitled Kai!!, with redrawn art and former friend Tsukasa upgraded to pursuable character status. The latter received an English translation by jjjewel on July 2015.

A PlayStation Vita port for both main games was released in 2016.

This game also provides examples of: