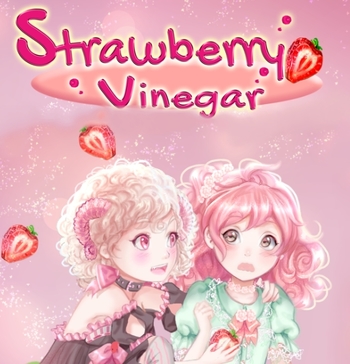 Strawberry Vinegar is a light yuri slice of life visual novel released on January 5, 2016 written by Ebi-Hime with art by Silly Selly.

The story revolves about a nine-year-old girl named Rie whose life is suddenly turned upside down when a demon called Licia enters her kitchen one day, stealing freshly baked cookies. Claiming to have come to reap her soul, she gives Rie a week: as long as she is fed delicious human food every single day, she will let Rie live.

In the course of a week, a friendship (or possibly something more) begins to blossom between the two girls...

Available for purchase on Steam