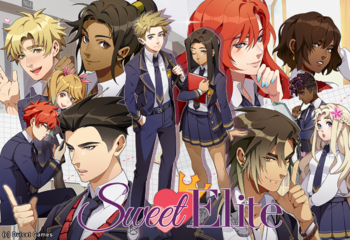 A school of love and secrets.
Advertisement:

Welcome to Arlington Academy, a prestigious boarding school for the highly ambitious, extremely talented and incredibly wealthy. Those who aren't from rich families but want to get into the exclusive school can apply for a scholarship, a limited number of which are offered each year. Only the most diligent and intelligent students are accepted.

Scholar is one such fortunate high schooler. Through a combination of hard work and determination, they managed to snag a spot into the school of their dreams. Unfortunately, their middle class upbringing earns them scorn from their peers; Karolina, the school's resident top model, is one such detractor, who believes Scholar isn't good enough for the academy. Neha, Karolina's friend and general fashion expert, isn't as hostile, but still rather cold towards the newcomer.

Thankfully for Scholar, not everyone at the school shares that elitist attitude. There's Alistair, a fellow scholarship student and down-to-earth athlete; Axel, a laid back, teenage rock star who's so mysterious no one knows his real name; Claire, a shy girl whose caring nature tends to overshadow her brilliant mind; Ellie, a part-time prankster with a passion for robotics; Raquel, an energetic, soccer enthusiast who's honest to a fault; Tadashi, the school's student body president whose tight-laced manner hides a softer side; Tegan, a tech genius who can easily hack into the most secure of databases but can't hack his charisma stat; and Tyler, a talented artist who loves nothing more than hanging out with his friends and sharing memes.

Not everything at Arlington is as it seems, though. Secrets abound within the academy, ones that could change the lives of its students. It's up to Scholar and their new friends to uncover the truth. They maybe even develop a crush along the way.

is an online visual novel created by Dulcet Games Inc. Development began in 2016 before being opened to the public in June 2018.

For the sake of simplicity, the player character will be referred to as "Scholar/your Scholar/our Scholar" and with gender-neutral pronouns.