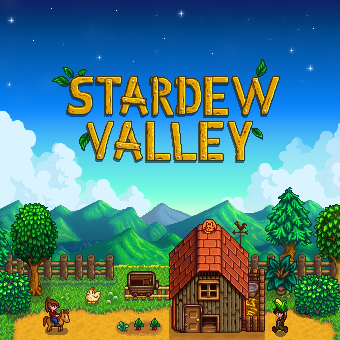 "Can you learn to live off the land and turn these overgrown fields into a thriving home?"
If you're reading this, you must be in dire need of a change.

The same thing happened to me, long ago. I'd lost sight of what mattered most in life... real connections with other people and nature. So I dropped everything and moved to the place I truly belong...
Advertisement:

is a Farm Life Sim for the PC, designed and programmed (in C#) with original pixel art and music by Eric "ConcernedApe" Barone, and originally published by Chucklefish Games

. An acknowledged inspiration for the game is early Harvest Moon, and as a result it feels and plays a lot like it, though it also has some additional gameplay elements like a crafting system and co-op play. The combat elements also give it a hint of Rune Factory, which has both farming and combat as well.

The story starts with the Player Character's grandfather dying. They've left them an envelope and advised they wait to open it until they are at their most depressed... Skipping to XX years later, sitting alone in your work cubicle at the Joja Corporation, you have indeed sunk into a deep depression, feeling as if your life has become meaningless routine. You open the envelope and discover that you've been left a plot of land and a run-down old farm in Pelican Town in Stardew Valley. There's also a vast network of caves nearby, where players can go spelunking and fighting monsters in search of loot and artifacts, similar to Harvest Moon DS.

But even now you can't get away from the Joja Corporation, as the town has recently opened a new JojaMart, and it has already begun threatening local businesses, polluting the area, vying for more land, crushing spirits and probably performing satanic rituals too. You can side with the town and revitalize the economy, making friends and giving gifts, or you can side with Joja, focus on money, and redevelop the town at the price of other local businesses' success.

You can buy it for Windows/Mac/Linux on Steam

An official prequel Comic Book titled Stardew Valley Before the Farmer was published in 2019 and a board game version was released in 2021.