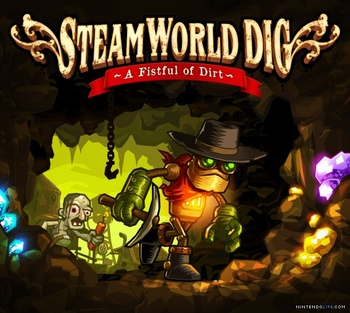 is a 2D platforming/adventure game released in late 2013 to PC and the Nintendo 3DS, and later ported to the PlayStation Vita, the PlayStation 4, the Wii U, and the Nintendo Switch. Set in a world of steampunk robots, the game stars Rusty, a steambot who's just arrived at the sleepy desert town of Tumbleton. Equipped initially with just a pickaxe, Rusty explores the depths of his late uncle's mine in search of valuable ores and gems. As his wealth increases, Rusty acquires additional equipment to help him dig deeper and deeper, where he comes across something else deep below the surface...

A follow-up game called SteamWorld Quest was discovered in 2016, initially as an exclusive for the Nintendo Switch. Shortly before the Switch's launch, however, the creators revealed that "Quest" was actually a working title for the sequel, SteamWorld Dig 2. Set some time after the events of Dig, the sequel casts the player as Dot, a female steambot hunting for the still-missing Rusty. An actual game called Steam World Quest would eventually be released as a card-based RPG.