From Stray to Pet 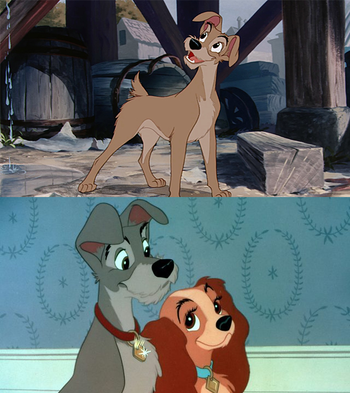 The Tramp: from street-smart hobo to family dog in the span of 75 minutes!
Advertisement:

A person finds a dog or cat on its own and decides to keep it. Occasionally the animal will be someone else's who got loose, however usually they're a stray.

In real life, it is not advised to interact with stray (and especially feral) animals due to a risk of them having diseases or because they might harm you. The latter applies far more to dogs than to cats and domestic birds (such as pigeons). Dogs are more inherently and realistically dangerous and capable of killing a human, whereas the other two, the more avoidant of conflict and relatively harmless cats and the although unwary of humans and disease-carrying in high concentrations but mostly harmless pigeons, aren't.

Pets Versus Strays is not always but is very often involved in such stories.

Compare to Rags to Riches and Recruited from the Gutter for humans. The inversion is A Pet into the Wild. May be done via Abandoned Pet in a Box. Related to Unsuccessful Pet Adoption.