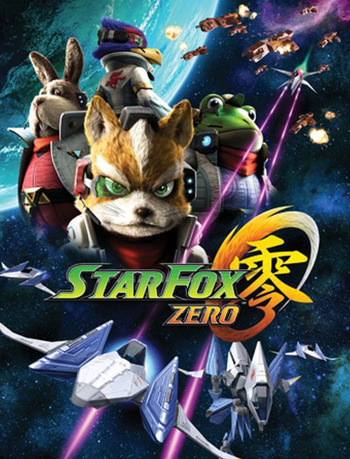 Star Fox Zero is an installment in the Star Fox video game series, released for Wii U on April 22, 2016. For the first time since Star Fox 64, it is directly developed in-house at Nintendo EPD (formerly EAD), in partnership with PlatinumGames.

Stated to be a "re-imagining" of the franchise, Star Fox Zero largely takes the series back to its roots storyline-wise. The original Star Fox team of Fox McCloud, Slippy Toad, Falco Lombardi and Peppy Hare are all active pilots, and they are once again pitted against the forces of the mad scientist Andross. Introduced to the series are transforming vehicles,note These actually originated in Star Fox 2 for the SNES. giving Arwings the ability to transform into Walkers while Landmasters can temporarily transform into Gravmasters.

Included with retail copies is the Spin-Off Star Fox Guard, a Tower Defense game starring a Mii using armed security cameras to defend the precious metals of a mining company owned by Slippy's uncle Grippy from raiding robots. If either game is purchased digitally, the other game has its price lowered if it's also bought digitally, resulting in a combined price that matches the retail version.

was released on April 20th to promote the game. The short is animated by Production I.G and Wit Studio,* and Orange, and adapts the events of the first mission.