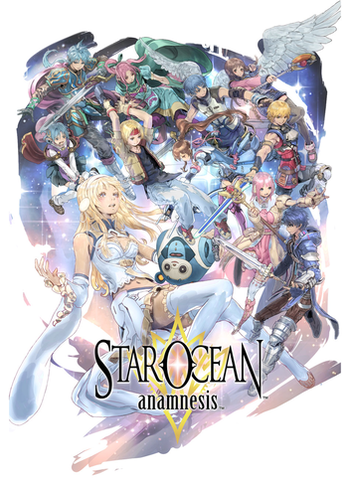 Heroes and Heroines from across the Star Ocean timeline.
"While carrying the burden of various problems, the trip back home begins..."
Advertisement:

Star Ocean: Anamnesis is a mobile phone game in the Star Ocean series developed by tri-Ace. It was created in celebration of the series 20th anniversary, featuring various characters from all the previous titles in the franchise, including music from series composer Motoi Sakuraba.

The game was released on Android and iOS platforms on Japan on December 7, 2016 and in North America on July 10, 2018. Sadly, after the 1st anniversary of the game's localization, Square Enix shut down the global server on November 5, 2019, leaving the game playable only in Japanese.

Taking place two years after Star Ocean: Integrity and Faithlessness, you take control of an battleship captain of the Pangalactic Federation under attack by a group of space pirates. Overwhelmed, you decided to evacuate your crews, leaving only you and your robotic operator Coro as the ones to make the last evacuation via a jump through a self-created warp gate powered by a hyperspace drive that technically should bring you instantly to Earth. Except something goes really wrong and you found yourself adrift in a faraway space outside the Federation's jurisdiction and made it your mission to get back to Earth ASAP.

Along the way, you encounter Evelysse, Eve for short, a mysterious woman with a mysterious Symbology power to summon heroes through time and space (read: Star Ocean characters, and then some) being accosted with monsters. You rescue her and continued your way to Earth, although Eve's tendency to try and help those in need will probably make you stop to nearby planets to help people, and accidentally unraveling Eve's past, one by one...

During the Star Ocean Fes 2018, the game's season 2 was revealed for the Japanese version of the game, titled Star Ocean: Anamnesis -Twin Eclipse-, which includes brand new tracks, new character, 3D homescreen characters, fully voiced main story along with other features. Season 3, titled Star Ocean: Anamnesis -Leash Code-, was teased at the end of Star Ocean Fes 2019, which looked like the story would get darker than the previous two seasons...

A light novel adaption of the first story arc was published online titled, STAR OCEAN anamnesis -The Beacon of Hope-, writen by Satoshi Wagahara. It was serialized at Dengeki Online from December 7, 2017 to March 19, 2018. It was later revised and modified, and was published in book form by Dengeki Bunko. It was illustrated by Mai Okuma (online edition) and Enami Katsumi (book edition).

and the Daily Life of Anamnesis Captain

, with all of them teaching the players how the game works, comedy with the various characters including event featured characters, recap on story chapters and other topics. You can read them by clicking on the respective one above, but all of them are in Japanese. The English version has started with the Arekore comics in English on the official Twitter page for the English version.

Star Ocean: Anamnesis takes Star Ocean's real time Action RPG battle system into the mobile port, where you can move your character with the touch pad and tapping on your enemies to attack them, in which your attack can differ depending on the distance with your enemy. Each characters have three skills, and can gain another one as they are augmented, and if the skills are being linked together, they will have increased damage. Fighting will build up a character's Rush gauge that when completed, can unleash a special attack, which other other characters (players in multiplayer), can follow up to increase the damage dealt on the enemy.

The characters are divided between these classes:

Despite the title being based on Star Ocean, it's actually a bit more closer to a tri-Ace gacha game, as eventually, the characters Evelysse can summon will also include Valkyrie Profile characters (it is the non-Star Ocean game that has the most characters aside of Star Ocean characters), and several guest characters, mainly from Square Enix, including NieR: Automata, Resonance of Fate, Infinite Undiscovery and Final Fantasy Brave Exvius.

Square-Enix would finally kill off the game for real in 2021 with the Japan servers going dark.