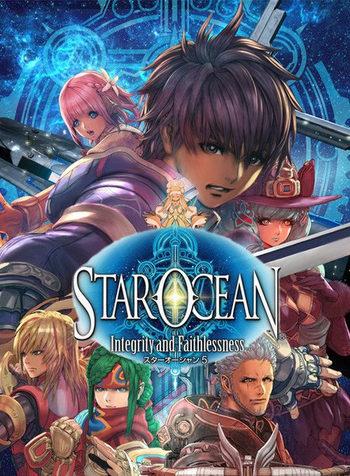 "Faith will lead you to what you seek."
Advertisement:

Star Ocean: Integrity and Faithlessness is the fifth console installment in the Star Ocean series. An interquel, it's set between the events of Star Ocean: The Second Story and Star Ocean: Till the End of Time.

Two hundred years after the events of The Second Story, the Galactic Federation has grown and prospered, spreading farther into space. After meeting multitudes of aliens and growing, it seems as though true peace is finally within reach. But on the planet Faycreed, a new conflict has begun brewing between kingdoms. Fidel Camuze, a young swordsman guarding his home village, and his childhood friend, Miki Sauvester, soon find themselves caught up in this conflict, which inevitably begins into an adventure spanning worlds.

The most notable change to this game is a more open-world feel in terms of battles. With no Fight Woosh or separate area for combat, all fights take place on the field. Arbitrary Headcount Limit and Lazy Backup is also out of the question as all party members participate in fights instead of being tagged in. The change has been compared to Infinite Undiscovery.

It was released for the PlayStation 4 in Japan on March 31, 2016; followed by American and European releases on June 28 and July 1, respectively.