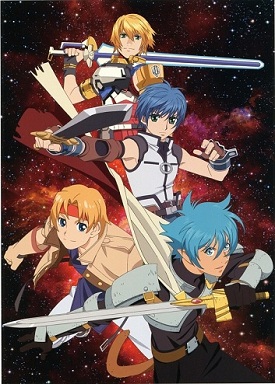 Top to Bottom: Edge Maverick (SO4), Fayt Leingod (SO3), Claude C. Kenny (SO2), and Roddick Farrence (SO1).
Advertisement:

Star Ocean is a series of Role Playing Games developed by tri-Ace and published by Square Enix.note Enix before the merger. All of them are set in the same universe, a high-tech Space Opera, but all of them spend a significant amount of time focusing on a low-tech, high-magic world. The games are known for their fast-paced, real time battle system, and for the Private Action system that allows the main character to interact with party members in cutscenes while in towns. These can affect the ending through changing Relationship Values.

There is also a 2001 game for the Game Boy Color titled Blue Sphere (not to be confused with that one), taking place two years after the events of The Second Story with all twelve party members available.

The first three main games, plus Blue Sphere, have had manga adaptations.

There is also an anime based on the second game's manga adaptation, entitled Star Ocean EX.

Most famously, the creator of this series were the original creators of the Tales Series, leaving Namco due to the Executive Meddling they encountered during the development of Tales of Phantasia. The first game is practically a Spiritual Successor to Tales of Phantasia where the battle engine is concerned.