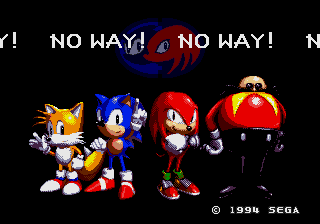 The one that only exists because of an Expansion Pack.

Blue Sphere is a hidden minigame included on the Sonic & Knuckles cartridge, based on the Special Stages of Sonic 3 & Knuckles. It is playable when you place (almost) any Genesis cartridge other than Sonic the Hedgehog 2 or 3 into S&K's lock-on slot and press the A, B, and C buttons at the same time. The vast majority of Genesis cartridges you can do this with only give you a single stage.note Some of the larger Genesis games, specifically ones larger than 2MB, are incompatible and just result in you going to Sonic & Knuckles instead. If, however, you do this with the first Sonic game or Sonic Classics 3 in 1, you'll have access to a whopping 134,217,728 stages. note Reportedly

, recycled levels start showing up after stage 128,016,000. Not that you'd even be able to get that far without passwords, anyway.

The object is to collect the Blue Spheres scattered throughout the wrap-around stage. Red Spheres are to be avoided; touching one results in a Game Over. Star spheres are bumpers that will send you moving in reverse in the direction you came from until you move forward or make a turn. Yellow Spheres jump you five spaces forward. Rings can be found on the stage as well; collecting all Rings in a stage is required alongside getting all the Blue Spheres for a "PERFECT". Grids of Blue Spheres larger than 3 by 3 cells can be turned into Rings by collecting the Blue Spheres that make up the perimeter of the grid, and only those spheres.

Upon completion of the stage, you'll be given a twelve-digit password for use when you play the game with the original Sonic the Hedgehog or the aforementioned compilation re-release locked into the top slot of S3&K. It also appears as its own game option in Sonic Mega Collection, Sonic Mega Collection Plus (which gave the minigame an official name for the first time), and the Sonic and Knuckles Collection for the PC.

Blue Sphere makes a return in Sonic Mania as the Special Stage format for Star Posts. Since the "Catch the UFO!" stages are already used for Chaos Emeralds, Blue Sphere is instead used for collecting Medallions, which are required for unlocks. This version is designed to look like its 16-bit counterpart, though with a few liberties taken to make it look a bit more modernized such as smoother sprite animations and a 16:9 aspect ratio. Additionally, the standalone unlockable version of Blue Sphere adds Green Spheres and Pink Spheres: Green Spheres are double-durability spheres that each must be tagged to turn it into a Blue Sphere, and Pink Spheres that teleport you to a different location on the grid.

Not to be confused with Star Ocean: Blue Sphere.