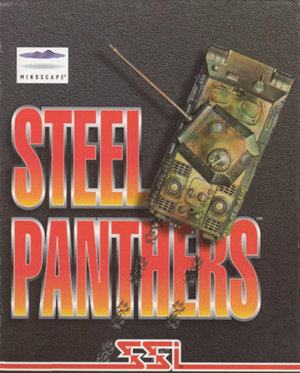 Steel Panthers is a series of Turn-Based Tactics games designed by Gary Grigsby and Keith Brors and developed by Strategic Simulations, Inc., the same people responsible for Panzer General. The first game focused exclusively on World War II (hence the name of the game), but the later games expanded its focus all the way to the Modern Era and beyond.

The games take place on the tactical level on a classic hex-based grid, with players directing individual vehicles and squads. Unit choices are broken down into four broad types (Infantry, Armor, Artillery, and Miscellaneous), with a wide range of diversity within these categories (for instance, Armor includes tanks, armored cars, and mechanized cavalry scouts; Infantry includes riflemen, engineers, snipers, etc.). In battle, in addition to killing the enemy, all weapons can also Suppress enemy units, which reduces accuracy and at high enough levels can pin units in place or even cause them to break and run. The principles of combined arms (using a properly balanced force) and overwatch (one unit moves while another covers them) are very important to remember, as is paying attention to terrain; those who don't tend to watch in horror as the enemy demolishes their forces in detail.

To date, four "official" games have been made:

, though commercial versions with additional features are also available. Both games receive yearly updates, which add new features and update the forces available to each country.

All games come with premade scenarios and campaigns, both historical and hypothetical, allowing players to test their skills by trying to do better than what really happened. There are also both battle and campaign generators, which allow for more balanced battles (points-wise, at least) and map and scenario editors so that players can design and distribute their own content.

The series as a whole continues to enjoy an active multiplayer community, with its central hub being TheBlitz

. They're also popular subjects of After Action Reports.

Some of the more prominent conflicts featured in scenarios include: