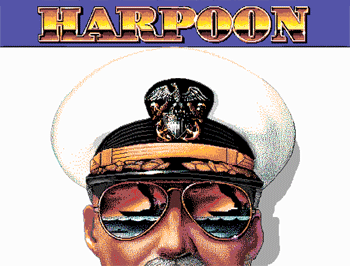 Harpoon is a Long Runner series of computer wargames based upon Larry Bond's naval miniatures rules. Originally released for DOS in December 1989, Harpoon is a game of modern naval operations, and was critically acclaimed by PC gaming magazines for its playability, depth, and accuracy. In 2013, AGSI, the latest developer, ceased development for the series.

It is composed of the following titles and addons:

The game series has you commanding naval and air forces in scenarios stretching from the North Sea to the Persian Gulf. The original Harpoon focused on Cold War-era NATO vs. Warsaw Pact confrontations on the world's oceans, but subsequent releases have included more modern scenarios. In particular, Harpoon Classic '97 included a campaign series featuring a war between the United States and European Union in 1996. An old players' scenario favorite is "Dawn Patrol", depicting a battle between Norwegian and Soviet missile boats.

The games' ships, aircraft, weapons, and sensors are all depicted in excruciating detail and drawn from real-life data. In fact, some of the games are accurate enough to be considered naval simulations—the original title was described by Tom Clancy as the best unclassified simulator out there, and modified versions have been used by real-life navies as training tools.

In spite of its Long Runner status, Harpoon's graphics have not evolved since 1989. Not going for the flashy graphics of modern strategy games, the game is played on plain map screens similar to the Combat Information Center displays on modern warships. The canceled Harpoon 4 would have had a 3D mode as a display option.

Harpoon has a mod community that's as old as the series itself; the earliest user scenarios date from 1990! Nowadays many scenarios are available on multiple fan websites. You can create your own scenarios and also make your own databases via a (free) request-able editor. Harpoon 3 has been a popular platform for custom datasets (a file containing unit parameters); the PlayersDB is particularly good, covers the 1960-2030+ period, and is constantly updated with community requests to cover new additions. It is considered the most functional and user-friendly of all current Harpoon 3 databases. The DB2000 covers the 1980-2015+ timeframe. There are databases for earlier time periods.