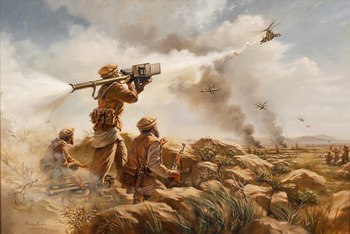 First Sting, oil on canvas painting representing the "first Stinger Missile kill" by the Mujahideen in 1986.
Blood spilt and machines destroyed are not the measure of this war. This is our Jihad, we are the mujahideen and thusly we are invincible, for God is Great!
Advertisement:

The beginning of the Soviet War in Afghanistan, also known as the Soviet Invasion of Afghanistan and the Soviet–Afghan War, is shrouded in paradoxes. The invasion supposedly began on Christmas Day 1979, with the arrival of KGB and Spetsnaz operatives in Kabul to overthrow the government of Afghan leader Hafizullah Amin. In two days, they would duly carry out their mission and were joined by a large force of Soviet conventional troops that crossed the border into Afghanistan. Yet, small numbers of Soviet troops had already been present in the country for half a year already, to support the Amin government in its fight against the growing insurgency waged by traditionalist rural populations that had been ongoing in some form for years. These troops, moreover, had been deployed at the express request of Amin himself, who considered himself until his last days to be a close ally of the Soviet Union. Even without Amin, the insurgency would continue to escalate, with the Soviets shouldering the main burden of fighting. Eventually, Soviet forces would leave a decade later, having wasted a great deal of treasure and blood and having been grossly humiliated, with the Soviet Union itself falling apart shortly thereafter. On the whole, the Soviet intervention in Afghanistan was a complicated affair that was difficult to define clearly and left a great deal of mess that remains unresolved today.

Soviet intervention was preceded by a series of political upheavals in 1970s Afghanistan that supplanted the old monarchy that enjoyed only loose allegiance of various tribespeople in the rural periphery and, eventually, by the end of the decade, left a band of communist revolutionaries in nominal charge of the country, with little effective control beyond a handful of cities. The Afghan communist leaders, who had only taken power through a coup in 1978, were fanatical ideologues whose attempts at modernization (such as forcing girls to attend school!) and authoritarian rule (while Afghanistan had never been democratic, the communists employed state oppression on a much grander scale than any previous government) were making the bad situation even more complicated by further offending the religious and the tribal populations of the country (not always the same: not all religious were tribal and not all tribal were religious, although many were both), among whom there was already an ongoing, endemic insurgency against the central government(s) in Kabul even before the coup. The insurgency reached a peak with the Herat Uprising in March, 1979, in which thousands of government officials, school teachers, non-religious in general, as well as several Soviet advisers to the Afghan government (and, possibly, their families) were massacred by Islamist rebels (which included a substantial number of mutinying government troops led by Ismail Khan, who would become a leading mujahideen commander later. To confuse the matters further, these rebels were mostly aligned with Iran and were largely ethnic Hazara who were Shi'ites, not Sunni Pashtuns with connections with Pakistan who would later make up much of mujahideen, and later, Taliban forces.)

Shocked by the magnitude of the incident and the fact that thousands of its troops defected to the rebels, the Afghan government requested the presence of Soviet troops in April, 1979 (because Afghan troops could no longer be relied upon to support the government, in light of the mass defection at Herat), and after declining initially, the Kremlin deployed small contingents, mostly special forces and air force, which were in place by June. However, the KGB determined that not only was the Afghan government making the situation worse through their ideological extremism that alienated the mostly traditionally-minded population of Afghanistan, there was a serious danger that they might turn to other countries (China, Pakistan, or even the West) if they did not get the kind of aid they were demanding from the Soviets (such switches in alliances had already taken place by 1970s with a number of former Soviet client regimes, including Egypt, Albania, Somalia, etc.). In an attempt to stabilize the situation, the Soviets decided to decapitate the regime by assassinating Hafizullah Amin and install a more pliable regime in its place. Soviet special forces operatives and KGB agents arrived in Kabul on Christmas Day, under the cover that they were simply reinforcing the troops already in the country. After a failed assassination attempt via poisoning, they assaulted the presidential palace two days later and killed Amin, although with much difficulty because of the large number of bodyguards who protected him. At the same time, a large reinforcement of Soviet conventional forces entered Afghanistan from the north and Babrak Kamal was installed in Kabul as the new leader, while the Soviets proclaimed the "liberation" of the country from the misrule of the Amin regime. From this point on, the Soviets became the main participant in the conflict in Afghanistan, as the unrest became even more intense and some Afghan army units openly mutinied against what they saw as a heavy-handed act of foreign aggression. The forcible removal of Amin, rather than calming the situation down, actually grossly exacerbated the crisis and trapped the Soviets in a long-term large-scale intervention that they hadn't planned for.

The net result of this invasion was to kill the already seriously wounded détente and start what became known as the "Second Cold War". A large-scale boycott of the 1980 Moscow Olympics followed, as well as an embargo on U.S. grain sales to the USSR. At the same time, the United States, Pakistan, Saudi Arabia, Iran, and several other countries provided arms and money to the rebels, known as the mujahideen. The Soviets ended up in a Vietnam War-style quagmire, not helped at all by brutal tactics that may or may not have involved the use of lethal chemical weapons (the US made frequent claims on the matter, but never quite managed to prove it).

By the mid-1980s, Soviets recognized that Afghanistan had become a heavy drain on their resources without any obvious end in sight. They became resentful of Kamal, the leader that they themselves installed, as he did not appear to be making significant attempt to develop an "independent" support base for the regime other than reliance on continued Soviet presence. Eventually, in 1985, Kamal was deposed in favor of Mohammed Najibullah by the Soviets as the preliminary step towards reducing their presence in Afghanistan. Finally, the Soviets pulled out in 1989 and, much like the United States in South Vietnam, left behind a government which sustained itself for only a few years before collapsing in 1992. The Soviet-backed government in Kabul fought to a successful stalemate until the funding dried up during the Yeltsin presidency (much like the government of South Vietnam, which was able to blunt North Vietnamese offensive with continued military aid and air support from United States until the Case-Church Amendment of June 1973 cut off further US support). Afghanistan's civil war continues to this day, as part of The War on Terror. In retrospect, historians widely consider the Soviet–Afghan War a major contributor to the Soviet Union's collapse in 1991, draining the country's economy over the course of the '80s and dealing a huge blow to the public's morale when the Red Army finally withdrew. To this day, it remains a sharp point of contention in the former Soviet states.

This became a rather popular setting for Western media in the 1980s, as for many the proof that the Soviet Union was an Evil Empire was an orphaned girl in a Pakistani refugee camp

. This usually led to portrayals of any mujahideen as noble, heroic underdogs versus said Evil Empire, which can be a bit jarring in light of current events. (Check out a 1993 profile

, titled "Anti-Soviet Warrior Puts His Army on the Road to Peace", about... Osama bin Laden.)

Ah yes, bin Laden. The ugly elephant in the room. Yes, Osama bin Laden was indeed part of the mujahideen who the US financed to combat the Soviet invasion. While it was never confirmed that bin Laden was directly trained and funded by the CIA, he did receive indirect American support through Pakistani intelligence and military. Bin Laden's experience and financial support from the war allowed him to form the terrorist group al Qaeda, setting the stage for the The War on Terror and all the controversy and chaos that brought about. Consequently, modern views of the Soviet invasion of Afghanistan tend to focus far more on the US's severely misplaced loyalties during that conflict and how badly it came to bite the country decades later. Many mujahideen soldiers also became members of the Taliban, who took advantage of the damage and power vacuum left behind after the Soviets' withdrawal to institute a theocratic government condemned the world over for severe human rights abuses. Not helping is how western narratives of the conflict still, to this day, tend to gloss over the large period of upheaval in Afghanistan that preceded the invasion, frequently depicting the Soviets as recklessly invading a country that was doing perfectly fine before the Reds came along, when in reality it was just one extension of a larger domestic conflict that only gained international attention because the Soviets got involved.

Given how hugely the war backfired on both the United States and the Soviet Union, it's highly likely that while the power vacuum that encouraged the rise of the Taliban would've still happened regardless of whether or not the two superpowers got involved, the fact that it turned into a theater for the Cold War meant that the final result was far more disastrous for the pair than if they'd just stayed out altogether.

Following the collapse of the USSR, media took a look at one of its darkest hours. There are also plenty of Afghan works set here.