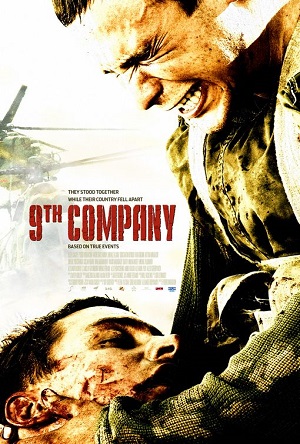 They stood together while their country fell apart.
—Tag Line
Advertisement:

9th Company (Russian: 9 Рота) is a 2005 Russian–Finnish–Ukrainian film directed by Fyodor Bondarchuk and set during the Soviet Invasion of Afghanistan. The film is loosely based on the events of the Battle for Hill 3234

. The protagonists are a group of young recruits of the Soviet Airborne Troops, first arriving at boot camp in Soviet Central Asia and receiving combat training, until they are sent to the frontline where they are stationed in a remote base, surrounded with hostile locals. Soon, they find themselves ordered to hold a hilltop post at all cost, while the mujahideen decide to strike.

There were two video game adaptations, a Russian only FPS The Truth about 9th Company and an RTS released on Steam with an English release 9th Company: Roots of Terror.