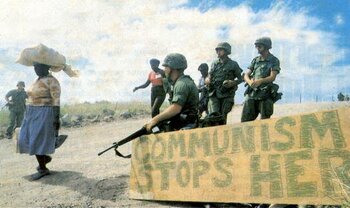 "The United Nations deeply deplores the armed intervention in Grenada, which constitutes a flagrant violation of international law and of the independence, sovereignty and territorial integrity of that State."
—United Nations on Operation Urgent Fury
Advertisement:

Grenada gained independence from the United Kingdom in 1974, but a 1979 revolution by the local Marxist-Leninist "New Jewelnote This word stood for "Joint Endeavour for Welfare, Education, and Liberation." Movement" suspended the constitution and invited Cuban military forces into the island. (We should note that most Grenadians supported their takeover at the time it happened.) After a 1983 internal power struggle ended with the deposal and execution of Prime Minister Maurice Bishop, the invasion began on October 25, 1983. A combined force of troops from the United States (nearly 10,000 troops), Jamaica, and members of the Regional Security System (approximately 300 troops) defeated Grenadian and Cuban resistance and the military government, now led by Hudson Austin, was deposed.

The United States cited the communist presence (particularly of Cuban military forces) as a justification to invade. They supported this claim by citing the alliance between the Grenadian regime and Castroite Cuba and the construction of airstrip they considered suspicious because it was too long for the civilian use it was nominally claimed to be for but long enough to base Soviet-make heavy bombers off. The true justification for the invasion was stated to be the presence of a hotel near the airstrip housing a few US students, and the supposed risk that they faced.

The invasion rapidly deposed the communist regime, and instituted a provisional government under American occupation. Forty-nine Grenadian soldiers and 25 Cubans were killed in the invasion, originally reported as 59 total by American forces. Twenty-four civilians also died in the fighting. The American military assault was, however, poorly organized, and led to a large-scale reorganization in 1986 to improve communications between the US military branches.

The United Nations General Assembly condemned the act by a vote of 122 to 9. The invasion was claimed to be an obvious violation of international law, and Britain, China, the USSR and Canada in particular condemned the act for displaying a complete disregard by the American government for international law. British Prime Minister Margaret Thatcher was specifically bothered because President Ronald Reagan had personally assured her the United States would not invade Grenada mere days before doing so.note She also apparently thought it was The Commonwealth of Nations' responsibility to put Grenada "right" rather than that of the U.S. Arguments still rage today over the issue.

Regardless of what you think of the invasion, the airport that was "too long for civilian use" was completed in 1984, is used for civilian aircraft, and is just as long as was planned for before the invasion. The day of the invasion is now a national holiday in Grenada, and sees large public celebration (including remembrance services for the 19 US servicemen killed) every year.