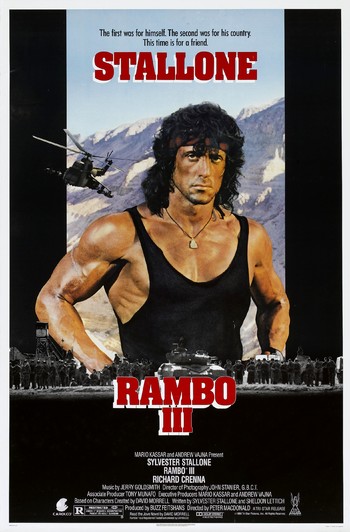 Col. Zaysen: Who are you?
Rambo: Your worst nightmare.
Col. Zaysen: It is just a matter of time before we achieve a complete victory.
Col. Trautman: Yeah, well, there won't be a victory. Every day, your war machines lose ground to a bunch of poorly-armed, poorly-equipped freedom fighters. The fact is that you underestimated your competition. If you'd studied your history, you'd know that these people have never given up to anyone. They'd rather die than be slaves to an invading army. You can't defeat a people like that. We tried; we already had our Vietnam! Now you're gonna have yours.
Advertisement:

Rambo III is the third film in the Rambo franchise, released in 1988.

The film begins with Trautman tracking down Rambo and asking him to join him on a mission to Afghanistan to assist local freedom fighters who are against the Soviets in the Soviet-Afghan war. Despite being shown pictures of suffering civilians, Rambo refuses and Trautman goes alone. But when Trautman is ambushed and captured by the Soviets, Rambo must go in and rescue him.

Col. Trautman: Hard to believe, John.
Rambo: What's that, sir?
Col. Trautman: Well, I hate to admit it, but the truth is, I think we're getting soft.
Rambo: Maybe just a little, sir. Just a little.