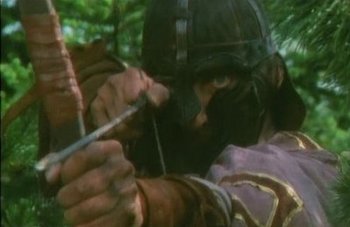 Helgi Skúlason is about to shoot you.
"Thungur Hnifur."
Advertisement:

The Raven Trilogy is a series of Icelandic medieval adventure films written and directed by Hrafn Gunnlaugsson note the first one was co-written by Producer Bo Jonsson (whose first name means "Raven"). The films include When the Raven Flies (1984, a.k.a. Revenge of the Barbarians), Shadow of the Raven (1988) and The White Viking (1991). The films are not traditionally connected, but all take place in the same world in various stages of The Viking Age and deals with the same themes; family, revenge and religion. Although full of anachronisms and inventions, the films were (at the time) one of the truest portraits of Norse people and Vikings ever made. The films are as follows:

The Raven Trilogy provides examples of the following tropes: