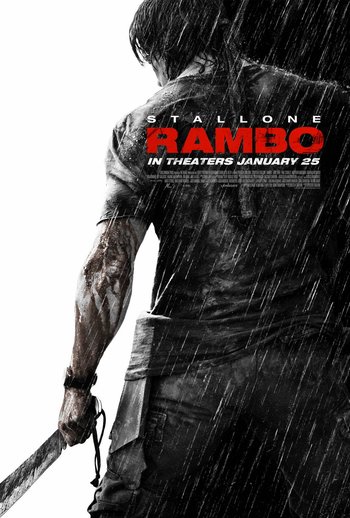 "When you're pushed, killing's as easy as breathing."
"Live for nothing, or die for something."
— John Rambo
Advertisement:

Rambo (also known in other markets as Rambo IVnote since in Europe, First Blood was already released as Rambo) or John Rambo) is the fourth film in the Rambo franchise, released in 2008.

Living in Thailand near the Burmese border, Rambo is asked by a group of American missionaries to take them to Burma on a humanitarian effort. While transporting them, they are ambushed by pirates. When negotiations fail, Rambo kills all the pirates, which disturbs the missionaries but doesn't fully dissuade them from going to the village in Burma — where they end up being captured during an attack. After ten days, Rambo is asked by a pastor associated with the missionaries to lead a group of mercenaries on a rescue mission, to which he reluctantly agrees.