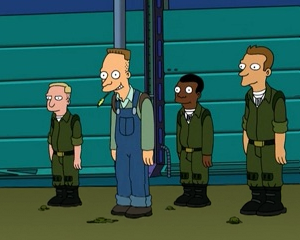 Well, goll-eee!
"Our captain has a handicap to cope with, sad to tell.
He's from Georgia, and he doesn't speak the language very well."
— "It Makes A Fellow Proud To Be A Soldier", An Evening Wasted with Tom Lehrer
Advertisement:

Hailing from the Deep South of the continental United States, he's a stereotypical cigar-chompin' Good Ol' Boy who thinks shootin' and blowin' stuff up is nothing but fun or at least doesn't take it as seriously as others in The Squad.

He speaks with a heavy drawl or accent and often peppers his speech with odd euphemisms or folksy sayings that leave others confused or at a loss for words. Should he earn a promotion to officer, this will manifest as addressing his subordinates as "Son" and "Boy".

His apparent lack of common sense is meant to indicate limited intelligence in general, and he's sometimes shown having a hard time understanding things that more urban-bred (and therefore educated) members of The Squad have no trouble at all with. On the other hand, he usually excels at shootin', fightin', and findin' things in the woods — all skills you need to be a good soldier — because he's been doing those since birth back home.

He's the foil for any minority or New Meat soldiers in the unit, as he almost exclusively gets to play the role of the insular xenophobe. Of course, if he makes it as far as participating in some foreign battle zone, you can count on him ignorantly blundering about and angering the locals to the frustration of his commanders.

Even if this character is written as an officer, it is important to remember that this is a class-specific trope. A military officer with southern accent, a good education and a genteel matter is not usually a Southern-Fried Private, but an attempt by the writer to provide some variety among a group of characters who might otherwise speak and dress pretty much the same. Good examples of this type would be "Bones" McCoy (DeForest Kelley) on Star Trek: The Original Series, Surgeon Wilkins (Chill Wills) in the John Wayne cavalry classic Rio Grande, and Chief Engineer "Trip" Tucker on Star Trek: Enterprise.

Truth in Television in the sense that it is a Real Life stereotype, stemming from the fact that there are many military bases in the South, as well as the abundance of Southerners in the military and their penchant for firearms and anything military-related. Compared to fiction, however, it isn't as prevalent due to the fact that doing such behavior could get his squad captured or even killed or even worse, get him court-martialed for his antics.

For those outside the US? Any geographical area of any country that's seen as being a bit backwards or remote or woodsy can breed a non-US version of this character.

Despite the title, this trope is not a cross between Groin Attack and Kill It with Fire.