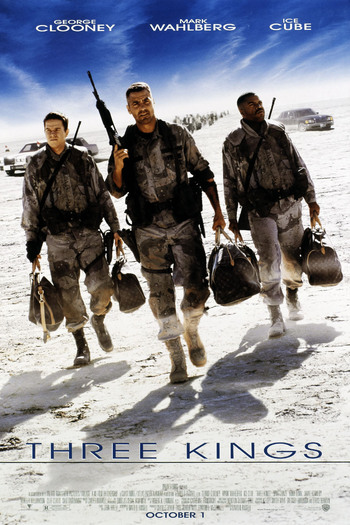 "We three kings be stealing the gold."
Advertisement:

It's a war action film with Black Comedy elements, set during the Iraqi uprising at the end of the 1991 Gulf War, also known as Operation Desert Storm. During the surrender of Iraqi soldiers, one Iraqi soldier is found to be concealing a map that ends up showing the location of gold that Saddam Hussein had plundered from Kuwait.

The four American soldiers sneak away from the camp, sending their attached journalist on a wild goose chase with another soldier, in order to find and steal the gold. Naturally, wacky hijinks ensue and the four soldiers become involved in the uprising.