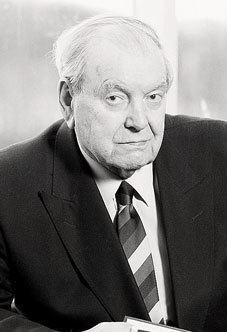 George MacDonald Fraser (2 April 1925 – 2 January 2008) was a British writer, and screenwriter, known for his Historical Fiction and his historical non-fiction.

Best known for the Flashman series, he also wrote the McAuslan series (inspired by his military service in the 1940s, which also resulted in the highly well-regarded non-fiction memoir Quartered Safe Out Here), several stand-alone novels, and a history of the English-Scottish Border Reivers.

He also worked as a screenwriter, writing or co-writing the screenplays to the James Bond film Octopussy, Richard Lester's The Three Musketeers and sequels, and Lester's film version of Fraser's own Royal Flash, among others.

Not to be confused with the Victorian fantasy author George MacDonald.

Works by George MacDonald Fraser with their own trope pages include:

Other works by George MacDonald Fraser provide examples of: