Film / The Lives of a Bengal Lancer 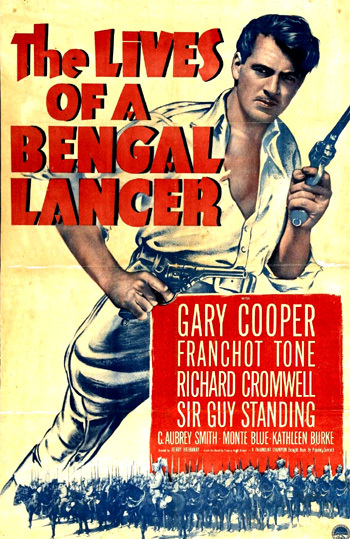 The setting is British India, aka The Raj, on the northwest frontier, which later became Pakistan. The 41st Bengal Lancers are a crack regiment defending the frontier against mountain tribesmen. Lieutenant Alan McGregor (Cooper), a hot-headed but brave veteran officer, welcomes two new arrivals: Lt. Forsythe (Tone), a wisecracking Deadpan Snarker, and Lt. Stone (Cromwell), a newbie fresh out of the Sandhurst military academy. It just so happens that Lt. Stone is the only son of Col. Stone (Standing), the regimental commander. The colonel's devotion to the army made him a Disappeared Dad years ago; young Stone speculates that his father might not even know that his son went to Sandhurst.

Meanwhile, army intelligence has learned that native chieftain Mohammed Khan is organizing a campaign against the British, uniting the tribes for a major attack. The regiment must prevent an ammunition shipment from falling into the hands of the enemy, but Lt. Stone's inexperience winds up jeopardizing the mission.