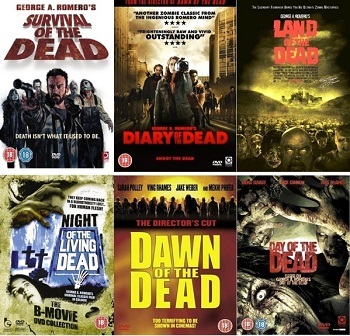 "[I've] always liked the 'monster within' idea. I like the zombies being us. Zombies are the blue-collar monsters."
— George A. Romero
Advertisement:

The Living Dead Series is a series of horror films started and mostly directed by George A. Romero, beginning in 1968. It is primarily responsible for codifying the modern trope of zombies as shambling, flesh-eating undead whose awakening typically brings about The End of the World as We Know It.

Each of the three original films also received remakes (and sometimes their own sequels) at some point, not all of them by anyone involved with the originals. Day got a second remake, ten years after the first.