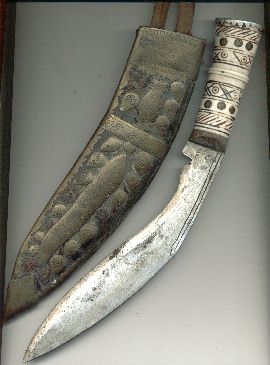 Good for chopping.
"A lil' of the ol' chop-chop!"
— The Sniper, Team Fortress 2
Advertisement:

A kukri (or khukuri) is a heavy Nepalese knife used both as a tool and as a weapon. The most distinctive feature of this weapon is that the blade has a deflected angle with a thick spine and a single sharp cutting edge; this causes the end section of the blade to strike square on, greatly increasing chopping effectiveness. To put it succinctly, a kukri is a knife that thinks it's a hatchet. It is most famously known as a part of the regimental weaponry and heraldry of Gurkha fighters. Forming part of the survival equipment carried by airmen during the early 1940s conflict in Burma, the Kukri is an essential item equally effective at hacking through jungle brush as it is through limbs.

For a relatively obscure weapon from Nepal, they feature quite frequently in the media, easily spotted because of their distinctive (and threatening) shape. As an interesting side note, it possibly wasn't actually invented in Nepal, but in Greece of all places. The current theory goes that the kukri is a (somewhat shrunken) descendant of a Greek machaira sword. The machaira itself was a modification of an earlier sword called the kopis (literally, "chopper"), just one of the large family of recurved sabers used throughout the Mediterranean. The troops of Alexander the Great brought it to India during his expedition there, and the locals may have adopted the design. The falcata, a similar recurved sword from Iberia, may share the same origin.

As with the katana, there is a persistent myth that the blade must 'taste blood' before it is sheathed. This is untrue, as a kukri is useful for far more than just violence. However there have been instances of Gurkhas slicing their fingers with it as a practical joke to impress outsiders with their ferocity. It's also been theorized that the "must taste blood" line was something that annoyed Gurkhas started telling tourists, to make them stop asking to see their kukris.