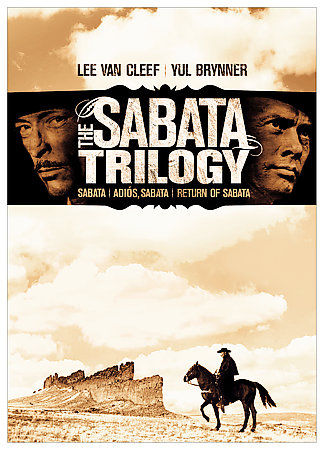 That should clue you in as to what kind of movie you're watching.

Sabata begins as a group of acrobats rob a small town bank, killing the guards and making off with the safe. Luckily, mysterious drifter Sabata (Lee Van Cleef) just happens to be in town; he kills the fuck out of them and brings the safe back before the posse even leaves. Taking a small reward for his actions, Sabata digs a little further/kills some people and learns that three prominent citizens were behind the theft. He blackmails them, causing them to respond by hiring wave after wave of mooks to kill him. Backed by knife-throwing ham Carrincha and silent acrobat Alley Cat, Sabata takes them all, upping his price each time.

The second film, despite being marketed as Adios, Sabata, wasn't originally meant to be a Sabata film, as indicated by its name, which translates to, Indio Black, you know what I'm going to tell you: You're a big son of a .... They decided to change it in order to cash in on the success of the first film.

It's even crazier than its predecessor. Seriously.

Yul Brynner plays Ind-Sabata, a stoic badass whose Weapon of Choice is a bizarre sawed-off rifle fed by a magazine containing seven bullets and one cigar. Set during the 1867 Mexican Revolution, Sabata gets involved with odd group of rebels: Escudo, the leader, essentially Carrincha from the first movie, played by the same actor; Gitano, whom Escudo orders to do the "Flamingo of Death" whenever he executes someone; Septiembre, who kicks musket balls at his enemies; and Ballentine, who keeps trying to rob them and whom Sabata inexplicably keeps alive. They plot to steal Austrian gold to finance the resistance, but the gold turns out be dirt, having already been stolen by monocle-wearing villain Colonel von Skimmel. To keep his secret, the evil villian sends waves of derby-hat-wearing Austrians to kill them.

Lee Van Cleef returns to play Sabata for the last film, Return of Sabata (Sabata is back ... to end another time). Sabata is once again trying to get money, this time from a lieutenant he knew in The American Civil War. This is considered by almost everyone to be the weakest film; there's much less shooting and much more camp, to the point where it feels like Van Cleef is playing a different character.