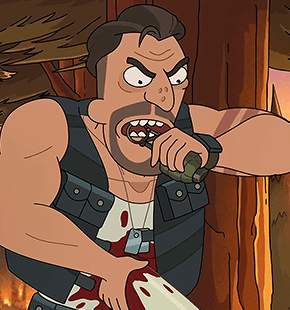 I hope he has a good dental plan!
The tough guy takes out a grenade and pulls the pin with his teeth, then tosses it to kill a bunch of mooks. It's a common trope in action flicks and war films.
Advertisement:

In reality, grenade pins are designed to be hard to pull so they won't be pulled accidentally. Attempting to pull them with your teeth will likely result in some painful dental damage.

Straightening the pin in advance to make it easier to pull is certainly possible (and easily accomplished one-handed) but it greatly increases the risk of mass casualty I Just Shot Marvin in the Face-style accidents so it isn't recommended.