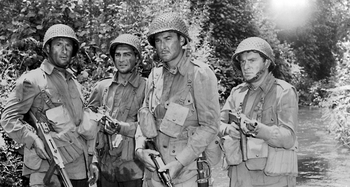 The time setting is a little vague but appears to be 1944. Captain Nelson (Flynn) is head of an elite squad of American paratroopers in the Burma theater of war. The Allies are planning an advance into Burma, and Nelson's squad has been given a special mission: parachute into Burma and destroy a key Japanese radar station. Afterwards they will march to an abandoned airfield, built by the British shortly before the Japanese conquered Burma, where they are to be taken out of enemy territory by American planes.

Nelson and his band of 33 paratroopers, accompanied by newspaper correspondent Mark Williams, parachute into Burma, 150 miles behind Japanese lines. The mission goes off without a hitch, the Americans mounting a surprise attack on the radar station and destroying it, annihilating the Japanese garrison without losing a man. However, the Japanese, now alerted to the presence of the enemy, pursue aggressively and intercept the Americans at the airfield. Nelson and his men escape but, unable to rendezvous with the planes, are forced to make a harrowing long march over land to safety.

Inspired by… the exploits of "Merrill's Marauders

", a Real Life American special operations unit that did in fact operate deep in the Japanese rear in Burma (although they weren't paratroopers).