Film / A Walk in the Sun 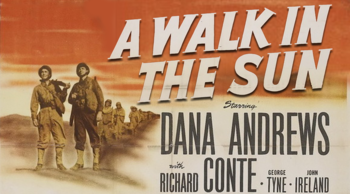 A Walk in the Sun (1945) is a World War II drama, following a platoon landing in Italy with their commanding lieutenant dead on arrival. Their one objective is to reach a farm house located seven miles away. During the walk, the men are faced with the realities of war: death, fighting, and the long, long periods of waiting for something to happen.

The film was directed by Lewis Milestone, famous for his other war film, All Quiet on the Western Front. This film stars Dana Andrews, Richard Conte, George Tyne, John Ireland, and Sterling Holloway.

This film was chosen by the National Film Registry in 2016, which seeks films that are "culturally, historically, and aesthetically significant."