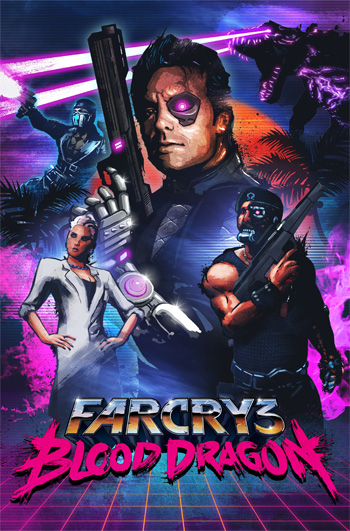 Far Cry 3: Blood Dragon is a 2013 First-Person Shooter developed by Ubisoft Montreal and released for digital download on PlayStation 3, Xbox 360, and Microsoft Windows. It is a stand-alone expansion of Far Cry 3; you don't have to own Far Cry 3 to play Blood Dragon, but having played Far Cry 3 may help you get used to Blood Dragon's controls.

The expansion game serves up a love letter to '80s action movies (and video games of roughly the same era) — it takes place on a bizarre, neon-colored island crawling with killer robot soldiers and robot animals, and it features a musical score filled with cheesy synthesizer music.

In the grim future of 2007, American cyber-soldier Sergeant Rex "Power" Colt (voiced by Michael "Kyle Reese" Biehn) travels to a remote island to destroy a rogue robot army led by his former mentor, Sloan. Armed with a wide array of weapons and accompanied by fellow soldier Spider (and Hot Scientist Dr. Darling later on), Rex has to get the girl, kill the bad guys, and save the world from the apocalypse's apocalypse.

Trials of the Blood Dragon, a spin-off starring Rex and Darling's kids was later released on June 14, 2016. Developed by Redlynx, the developers of Trials, the game is a physics-based vehicle game.

An Updated Re-release for consolesnote PC users will simply receive a free copy of the PC version was revealed during Ubisoft Forward 2021,

Due to an excess of examples, you can find any Shout Outs over on their own subpage.