Film / The Four Days of Naples 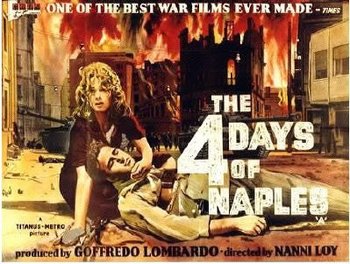 The Four Days of Naples is a 1962 film from Italy directed by Nanni Loy.

It's about, well, the "Four days of Naples

." September, 1943. Neapolitans are sick of war, sick of being hungry, sick of their city getting bombed. So when the new government announces on September 8, 1943, that Italy is asking the Allies for an armistice and getting out of the war, the people of Naples are delirious with joy.

Unfortunately the Germans are still in the country and are not quitting the war. The people of Naples are still dancing in the streets when the German army moves in. The commander announces martial law, and the Germans shoot a sailor in the town square just to make a point. Panic spreads when the Germans start rounding up the men of the town, intending to take them off to Germany as slave labor. When the Germans take hostages with the promise of executing them if the townsfolk misbehave, the citizens of Naples rise up in revolt. Civilians and partisans, scrounging up any weapons they can find, engage the Germans in a four-day battle for the city.