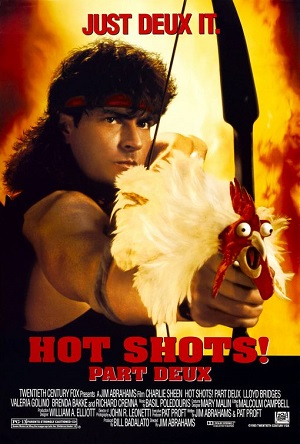 Topper: Why did you have to come here now? Of all the missions in all the jungles in the world, you had to come walking into this one.
Ramada: Oh, Topper, I tried to stay away, I thought I was never going to see you again, that you were out of my life. But it's a sequel, I had to come.
Advertisement:

The movie did for Rambo what the original did for Top Gun. This time the story is a near perfect recreation of Rambo III, where Topper has resigned himself to an Asian monk village. His commanding officer Colonel Walters arrives to recruit him for a rescue mission to save American hostages from Saddam Hussein. Topper refuses, but when Walters is captured on the following rescue attempt, Topper agrees to go in and rescue everyone.