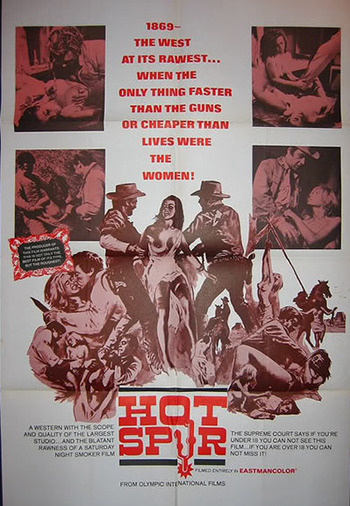 In 1863 in border country, Carlo, a young Mexican, is forced to watch a group of American ranch hands, led by Wes and Jerry, humiliate and repeatedly rape his 17-year-old sister. The last man to rape her is Jason O'Hare, owner of a large Arizona cattle ranch. Carlo's sister dies as a result of the attack, and he is haunted by the thought of cowboys mounting her as they would a horse. Six years later, Carlo sees O'Hare's distinctive ring during a fight in a cantina. Now having identified his target, Carlo undertakes his revenge. He gets a job as a stableboy on O'Hare's ranch, but Susan, Jason's voluptuous wife, will not let a Mexican near her horse. She washes the horse herself, and in her clinging clothing she excites onlookers. The ranch hands then cavort with some Mexican prostitutes, arousing Jason to the point that he forces himself on his wife. Carlo watches and remembers once more his sister's cruel rape. He is thrown off the ranch that night by Tom and Wes but the next day returns to kidnap Susan. Telling her about Jason's crime, he takes her to a mine shaft in the hills, where he rapes her. Carlo deliberately has left clues leading to the mine, and Jason sends his men in pursuit. The men find Susan nude, hanging by her wrists; and Carlo manages to shoot or stab all of them but is himself wounded. Jason arrives to find all his men dead and Susan still hanging. Carlo taunts him, and in the final shootout with Jason, Carlo dies. Susan manages to cut herself free and, in blind fury, stabs Jason, mistaking him for Carlo, then turns the knife on herself.