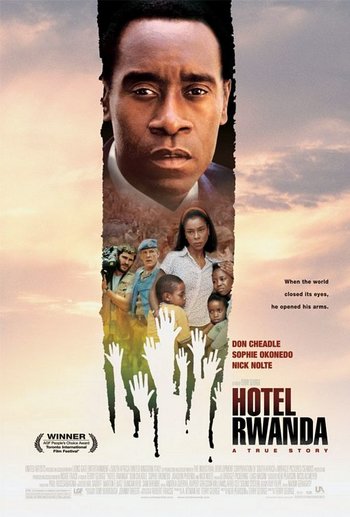 Hotel Rwanda is a 2004 historical drama directed by Terry George that is sometimes referred to as an African Schindler's List, with good reason. It tells the true story of Paul Rusesabagina (Don Cheadle) during the Rwandan genocide. Paul was a successful Hutu businessman who managed the five-star Hôtel des Mille Collines, and hid and protected refugees there.

The Rwandan genocide started when the Tutsi fell out of the power they had been assigned by the Belgians, who used to control their country. The darker-skinned Hutus (the majority of the Rwandan population) were once considered inferior. Hutu extremists felt that the Tutsi were their oppressors and needed to be wiped out completely. Paul finds himself in no real danger because he is a Hutu, but his Tutsi wife Tatiana (Sophie Okonedo) is. After doing business with the very same Hutu extremists and witnessing horrific things done to his wife's people, Paul decides that he must do something about it and not let his neighbors and friends die. Refugees and orphans came to seek shelter in the Mille Collines hotel, and this powerful movie recounts that story.

It's cited as one of the most inspirational movies of all time. Paul Rusesabagina was contacted for help with writing the film.