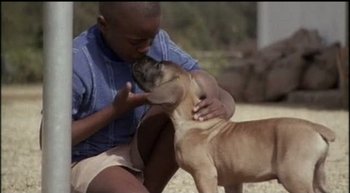 The film is set in South Africa. At some date shortly before the end of apartheid in 1994, a Xhosa boy named Thembile, who looks to be about 12, lives on a white Afrikaner's plantation. Thembile has befriended a young puppy. The boy and the puppy become best friends—until Johannes, the plantation owner, intervenes. Johannes makes Thembile stuff the dog in a bag. Johannes kicks the dog repeatedly. Then he makes Thembile open the bag. The idea seems to be to train the dog to hate and fear black people.

Skip forward to after the end of apartheid (as demonstrated by the new flag). Nelson Mandela may be president but Johannes is still the owner of the plantation. Thembile has grown to adulthood and works for Johannes; the dog, now grown quite large, does in fact bark and growl at black people. One day Johannes and Thembile go out to mend a fence, taking the dog along. Then something unexpected happens.