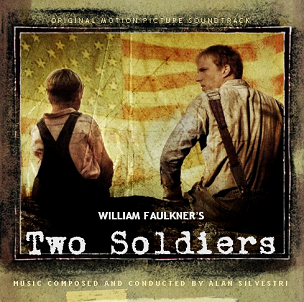 Two Soldiers is a 2003 short film (just barely—it gets under the AMPAS 40-minute "short film" mark by about 15 seconds) directed by Aaron Schneider.

Rural Mississippi, 1941. Pete and Willie are brothers. Despite the age difference, Willie being nine and Pete being about a decade older, they are close as close can be. An innocent country life of farming and collecting bird eggs is interrupted by news bulletins reporting the Japanese attack on Pearl Harbor. Pete immediately decides to enlist, despite the fact that as a farm worker he doesn't have to. He bids Willie goodbye, but Willie decides that he's going to go to war with his big brother. A difficult journey to the induction center in Memphis eventually has Willie crossing paths with a kindly Army colonel (Ron Perlman), who helps him in his quest.

Based on a short story by William Faulkner.