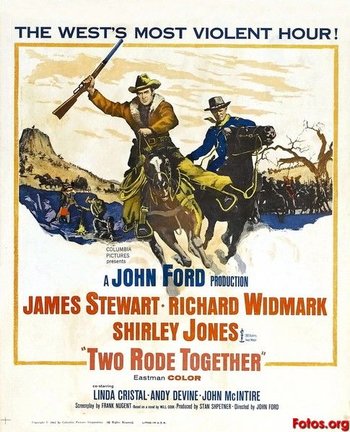 Two Rode Together is a 1961 Western film directed by John Ford, starring James Stewart, Richard Widmark, and Shirley Jones. It's loosely based on Will Cook's novel Comanche Captives, and bears strong similarities to Ford's previous Western, The Searchers.

The plot involves Marshal Guthrie McCabe (Stewart) and cavalry Lieutenant Jim Gary (Widmark) hired to rescue white captives from Comanche Indians led by Quanah Parker (Henry Brandon). They succeed in negotiating the release of Elena (Linda Cristal), a Mexican woman and "wife" of Comanche warrior Stone Calf (Woody Strode), and Running Wolf (David Kent), who may or may not be the brother of Marty (Jones), Gary's love interest. However, McCabe and Gary's mission has complications: the captives don't want to return to white society, and the whites seem reluctant to accept them.